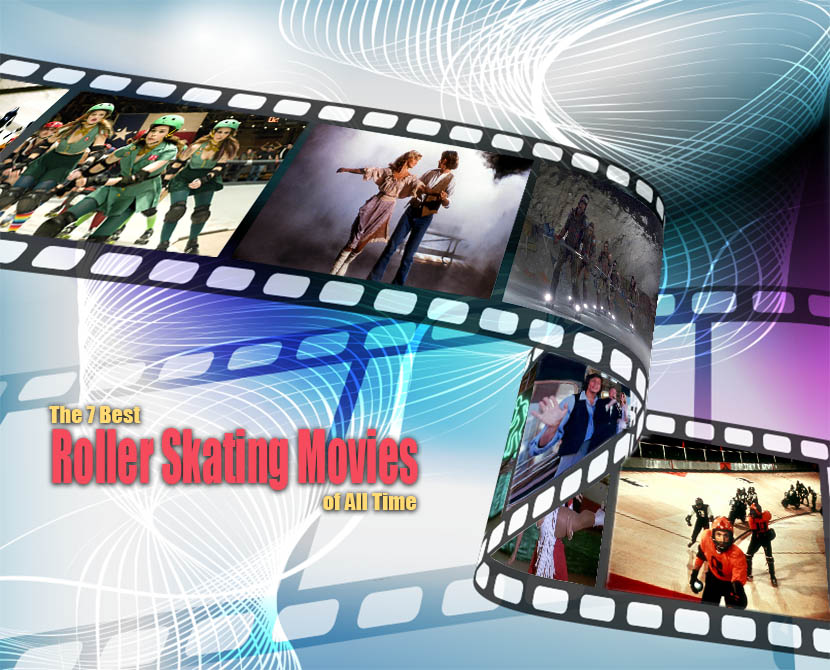 Below you will find my list of the best roller skating movies. Since their invention in the 18th century, roller skates have been a turning point in human recreational history. They’re fun, sporty and catchy.

Roller skates have been used as an essential US troops equipment to move infantry in World War II, as well as being a hobby, a sport and dancing equipment for boys and girls of all ages.

However, roller skates had their share of “Roller Skate Craze” moments across history, most notably in the 60s, the disco style skating 70s to 80s, the early 1990s and even today.

A lot of the roller skating obsessions have also been played out in all different kinds of roller skating and rollerblading movies. With every hit roller skating movie that included any form of roller blades or skates, the media and public went crazy over them.

Kicking off our list with a stunt packed adventure movie. Roller Boogie was released in December 1979. The movie features Linda Blair as Terry Barkley and the famous Competitive Artistic Roller Skater Jim Bray as Bobby James.

Although it was planned for Jim Bray to play Bobby James only as a stunt double, after the producers’ failure to find an actor they liked, they decided to cast Jim Bray instead. With Jim’s several skating awards and amazing stunt moves, the producers decided to hire him as Bobby.

The movie plot is about Terry, a neglected teenage girl with wealthy parents who wanted her to make it into the Juilliard School for Art and Music as a flutist. However, her parents had no idea how much their daughter hated playing the flute.

While accompanying her friend Lana, who was skating on the Broadwalk of Venice Beach, California, Terry encounters Booby James for the first time, a talented roller skater who believes that he can make it into the next Olympics.

Terry ignores Bobby when she meets him the first time. However, after saving her from a roller skating accident, she then later warms to him. She then asks him to teach her how to dance, so she can compete in a roller boogie contests in a local rink called Jammers.

The plot thickens when they discover that the rink is about to be sold to a corrupt developer. Terry and Bobby decide to team up and save the rink.

If your main priority is to enjoy some amazing roller skating skills and stunts done by an award-winning performer, then I’d recommend picking Roller Boogie for the movie night.

The movie is about a future where all of humankind’s problems have been solved in exchange for personal freedom.

In a world where large corporations have replaced the government, and the world has become a global state controlled by powerful moguls, a violent sport called Rollerball becomes the only source of entertainment for the public.

With its extreme brutality, corporations use rollerball to demonstrate the futility of freedom of action and individualism.

However, Jonathan E. (James Caan), who is the star and team captain of the Houston rollerball team, is asked to announce his retirement by Mr. Bartholomew (John Houseman), the chairman of the Energy Corporation, without explaining the reason behind it.

Upon Jonathan’s refusal, the rules of the game change to become extra violent in order to take him out. He then rebels and fights his way against the corporations’ power to earn his personal freedom.

The movie’s plot and in-movie sport were so popular back in the day that many video game developers adopted the idea of the rollerball sport. Games such as rocket ball (1985) and its unofficial successor killer ball (1989) were based on rollerball rules.

Despite the movie’s original idea, the screenplay that the movie is based on has a much deeper plot showcasing the movie’s universe and explaining the sequences that led the earth to become a corporate state.

However, if you want an action-packed sci-fi movie that portrays a bad-ass, futuristic style of roller skating in an offbeat way, then you should consider rollerball on your ‘to-watch’ movies list.

Xanadu is a fantasy roller-skating musical film released in 1980. Starring the beautiful Olivia Newton-John, Gene Kelly, and Micheal Beck, Xanadu is packed with a group of talented dancers, actors, and musicians.

The movie presents an excellent model of what the late 70s musicals and the disco style’s golden era. The movie is about a painter (Michael Beck) who is fascinated by a woman he finds on the background of one of his photograph assignments.

He then begins his quest to find her in the auditorium, where the photo was taken. He then finds out that Kira (Olivia Newton-John) is in fact a Greek muse whose job it is to help people follow their dreams.

She then leads him to team up with an old friend (Gene Kelly) to pursue their fantasy of having a roller-skating disco.

Although the plot is the weakest point of the movie, it still features some astounding music, excellent cinematography, and well-prepared choreography.

If you enjoy musicals, with a sweet tinge of fantasy and retro style 70s disco themes, then you’re in for a treat!

The movie was produced in late 1979 to hop on the roller skating bandwagon. Skatetown, U.S.A is another movie that capitalized on the short-lived era of roller disco craze that hit the United States back in the 1970s.

Similar to most roller skating movies at that time, the movie didn’t feature a strong plot.  However, the movie features a wide range of television stars such as Scott Baio, Maureen McCormick, Flip Wilson, and the debut of one of Hollywood’s Hotshots, Patrick Swayze.

Skatetown, U.S.A’s plot is simply about a fierce rivalry between a street gang leader Stan Nelson, who was played by Greg Bradford, and a local young roller skater named Ace Johnson, played by Patrick Swayze, for a prize of $1,000 and a moped.

The movie highlights some of Swayze’s iconic moves and skating stunts. It also had almost non-stop diegetic background music playing along with the whole movie.

The movie has recently been released on Sony’s Blu-ray. Which is the first-ever home media access, since it had never been on VHS or DVD.

Boogie Nights was produced in 1997. In my humble opinion, it’s one of the most underrated movies in the history of Hollywood. Of course, this one is just for the adults in the room – not a kid movie.

The perfect use of music in this movie will make you feel like you’re in the 70s. The movie is about Eddie Adams, a teenage dishwasher boy from San Fernando Valley (Mark Wahlberg) who gets discovered by the director Jack Horner (Burt Reynolds).

The boy then becomes an adult movie superstar under the name of Dirk Diggler. The film reveals the story about his rise and fall due to egotism and drugs. There are several scenes showing roller skating.

Boogie Nights depicts the late 70s and 80s period, while offering a perfect mix between tragedy, and comedy.

It’s an excellent suggestion to anyone who wants to watch a masterpiece of Hollywood’s quality productions when the kids are off in bed.

The movie was produced in 1986. Solarbabies is directed by the 3-time Emmy awards winner Alan Johnson. The movie is about an extremely dry post-apocalyptic world that’s ruled by The Eco Protectorate, a semi-militarized organization.

After the discovery of a powerful sphere called Bohdai, a legendary orb that can bring water and rain back to earth, a war between good and evil begins.

A group of rebellious teenage orphans who discovered the orb, including Terra (Jami Gertz), Jason (Jason Patric), and Daniel (Lukas Haas), tries to escape the orphanage on their roller skates to live a free life.

Multiple turns in events then lead to a roller derby fight between the teenage orphans and  Darstar (Adrian Pasdar), who schemed to swipe the orb.

Flash-forward to the late 2000s, Whip it is one of the most recently produced roller skating movies by Drew Barrymore.

Whip it is based on Shauna’s Cross novel “Derby Girl”. The story is about a teenage Texan called Bliss (Ellen Page), whose mother is a former beauty queen that’s pushing Bliss into the world of conformity and beauty pageants, despite her daughter’s lack of interest.

Bliss then discovers her immense interest in the tough world of roller derby. She tries out for Hurl Scouts teams and joins them. She then hides the secret from her parents.

But there is a time conflict between a Bluebonnet Beauty pageant and the state roller derby championship game that puts Bliss into a hard choice of what to do next.

Whip it is 2 hours of heartwarming drama, comedy, and adventure, mixed with the pacey taste of roller skates that works as a perfect example of a family movie.

Did watching all of those movies get your blood pumping for some roller skating? You have come to the right place. Below are a list of the top articles on this site to help you get started skating in no time.

Whether you prefer an action-packed sci-fi movie like Solarbabies or Rollerball, a movie with a powerful plot like Boogie Nights, or you’re just in for musicals like Skatetown U.S.A or Xanadu, roller skate movies are able to satisfy your taste.

So there you have it, a list that includes the best roller skate movies that feature all kinds of genres.

Did I leave out your favorite? Tell me in the comments below and maybe I’ll add it to the list!